As it’s the start of 2016, we thought we would spend a bit of time each month to talk about what we are up to and plan to do over the coming weeks.

What better way to start than on the 1st January.

Arable – Well the first thing to note is that it’s wet! Luckily we haven’t suffered any significant flooding but any plans to work on the fields went out the window a long time ago, which means hedge cutting and ditch cleaning is on hold for a few more weeks unless we get some frosts. But we have a cut off point of the 29th Feb whereby we can’t cut any hedges in order to protect nesting birds under Cross Compliance Rules set by Defra. 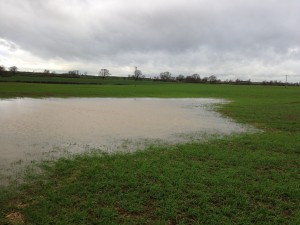 The worst of the water logging on the farm

Livestock – two out of the four heifers which were sired by our new bull, ‘Aynho Proud Galliant’ have calved which was very exciting in December. Not only was it a relief to see that the new bull had done his job, but also these were the first generation of Aberdeen Angus cows that had been bread on the farm under our own pedigree herd name ‘Wold’. We tend to bring their calving a month or two forward from the main herd as its their first time and tend to need more TLC compared to the more experienced cows.

Hay & Haylage – the wet weather has seen an increase in deliveries being made to livery yards and horse owners. We have shifted over 11,000 small bales this season so far and hope to build on this in the coming months. Our switch to only producing seed haylage from rye grass instead of a meadow grass as in previous years has seen an marked improvement in producing consistently high quality fodder and next to zero spoilt bales being returned. 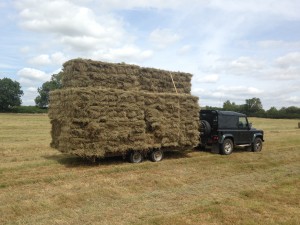 The to-do list – in the next month we hope to cut all the hedges left to trim, ditch at least 800 metres of field ditches, muck out a couple of cattle sheds in readiness for the main herd to calve, plant a further 40 cricket bat willow trees and start going through our arable machinery in particular our cultivator and drill in preparation for spring drilling in March/April where hope to drill spring barley and beans.  There is always a nice long list of jobs to keep us busy and warm in the winter months.